Heal The Planet Global Organisation-HTP is disappointed that Turkey has shot down Russia's Aircraft on the Boarder. Turkey has not considered Moscow’s Role in fighting ISIS and ensuring global peace and stability. Turkey’s action is a sign of ungratefulness and luck of appreciation. We strongly condemn Turkey's action that we refer to as provocative.

Turkey should know that even if the plane had entered Turkey's airstrip, it would not be for purposes of declaring war on Turkey. The actions of Turkey's actions are unjustifiable and this a clear sign that it’s compromising if not supporting rebels distablising Syria.

We call upon Turkey to appologise instead of calling meetings with NATO.

President Obama is wrong in defending Turkey's actions. The Pentagon is to blame for the rise of Islamic State which is butchering innocent lives around the world. The continuous supply of money, military hard ware and training to rebels is a major un-doubtable factor in IS actions and bringing down a democratic president contravenes America’s message of democratizing the world.

We commend Putin's sacrifice in ending IS and wiping them off the world map.

We ask the International community to support Russia's Airstrikes and operations to defeat IS.

Heal The Planet Global Organization -HTP condemns Alshab Militia attack on African Union Base in Somalia which has left many dead including UPDF soldiers. This is just a coward act and we commend the great work done by AU in ending atrocities committed against the people of Somalia. The UPDF and A.U must remain strong towards a humanitarian cause that they stand holding of the mission in Somalia.

The extremists should know that we cannot be intimidated or even back off at the time when the rest of the world needs us especially at an era like this of insecurity, tyranny, terrorism and extremism.

On behalf of HTP Team 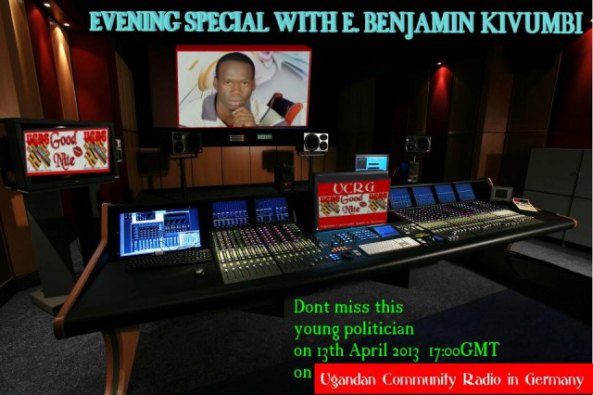 Kivumbi whose placard had not been seen by the security at the entrance has been lifted moments after U.N Boss started his speech. It has been hard for him to be dragged away probably because he has been standing next to diplomats and foreign dignitaries as both local and International journalists turned there camera on him which would be a bad image for Uganda on Human Rights & Freedom of Expression.

After along time of puzzle, the security resorted to asking him to drop it down and wait for New Vision Boss Robert Kabushenga who has been the Master of Ceremony toto give him chance to speak which he hasn’t not risking making things more berserk had he gotten chance to pur anguish on U.N handling of Bokoharam question in Nigeria.

Immediately after the lecture to avoid b arrest, Kivumbi covered his purple kitengi attire with a black jacket, went and shook hands with security Minister Hon Muruli Mukasa who has represent the Vice President H.E Edward Kiwanuka Sekandi and then disappeared in the crowd.

In an exclusive interview with the Daily Monitor Journalist who questioned Kivumbi’s NRM Cardership especially some times acting controversial like recently criticized the Police brutality against WBS Journalist while covering a story at Old Kampala Police Station; Kivumbi has said that pointing out a wrong done is what will save NRM from collapsing and he added MZEE President Museveni loves brilliant young people like him.

This is not the first time Kivumbi demonstrates.

Uganda Vs Kivumbi Ernest Benjamin & 2 others

In 2010, Government battled Kivumbi and 2 other People’s Development Party-PDP officials who included Peter Clever Birimuye & Steven Muwulya at Buganda Road Magistrates Court for 8 months following Kivumbi’s unauthorized demo at Parliament protesting what he called missing using State House by hosting party issues. This was at the time he was in opposition before meeting President Museveni in Jan 2011. Kivumbi bythen PDP Deputy Spekes and EX National Coordinator had been locked down at Central Police Station for 3 days until Dr. Abed Bwanika sent Lawyers to him and other officials to get them out. See case here https://presidentkivumbi.wordpress.com/2010/04/17/uganda-vs-kivumbi-ernest-benjamin-2-others/" target="_blank" rel="nofollow">https://presidentkivumbi.wordpress.com/2010/04/17/uganda-vs-kivumbi-ernest-benjamin-2-others/

Equally so in July 2013, Kivumbi was interrogated for 7 hours by the Criminal Intelligence Department-CID at Parliament when he was reprimanded from Deputy Speakers office Hon Olanya who he was petitioning to grunt Asylum to United States fugitive and whistle Brower Edward Snowden. Security and intelligence quizzed Kivumbi for his connection with Snowden but latter in the night was released without being charged. See Channel 44 News Video on Kivumbi here https://www.youtube.com/watch?v=27PfZ8TROc0" target="_blank" rel="nofollow">https://www.youtube.com/watch?v=27PfZ8TROc0

This is the question that has been put on him, but Kivumbi says Scovia 20 years believes in Kivumbi’s dreams just like Janet Museveni believed in her husband who is now President for 30 years. Kivumbi is Scovia’s no 1 celebrity and fan and she’s behind him. Theie wedding took place on 14th Dec 2014, see pictorial and story here in The Sunrise News Paper https://hicginewsagency.wordpress.com/2015/01/17/the-sunrise-news-paper-full-colour-page-pictorial-on-earnest-benjamin-princess-scovia-kivumbi-introduction-wedding/

Kivumbi Back from Soroti

In a related story Kivumbi this afternoon has arrived safely from Soroti where he has been away for 3 days on National Resistance Movement-NRM Liberation Celebrations of 29 years. He has been received by Princess Scovia Kivumbi, Brian Ssenkungu & a Ugandan Journalist. See Kivumbi’s stay in Soroti here https://hicginewsagency.wordpress.com/2015/01/26/kivumbi-joins-museveni-for-nrm-29-aniversary-in-soroti/" target="_blank" rel="nofollow">https://hicginewsagency.wordpress.com/2015/01/26/kivumbi-joins-museveni-for-nrm-29-aniversary-in-soroti/

Heal The Planet Global Organisation HTP has wound up its Retreat and extraordinary meeting at Namasuba Hill on Entebbe High. Speaking to the newly elected Executive Coordinator Mr. Armstrong Ongera a Nairobi based philanthropist who was among the delegates of different nationals gathered at Kivumbi Earnest Benjamin﻿ Home where the 3 day retreat took place, Hicgi News Agency﻿ has established that the gathering was a success that helped to restratigise and plan for HTP. Kivumbi Earnest Benjamin﻿ a Kampala Central based African young politician and business man is the founder and President of HTP. Details of the meeting will emerge latter. In this pic are HTP Members Ps Abraham Ssennono Brondon, Kivumbi Earnest Benjamin, Esther Nasuna Favor, Armstrong Ongera Jr.﻿,Peter Matson MulindwaHon Ongera Mokaya﻿, Caleb Turyamuhika & Allan Kitonsa Struggle﻿ in Namasuba

We're Advancing towards full Incorporation of Heal  The Planet Global Organisation-HTP; the folowing are some of the documents. 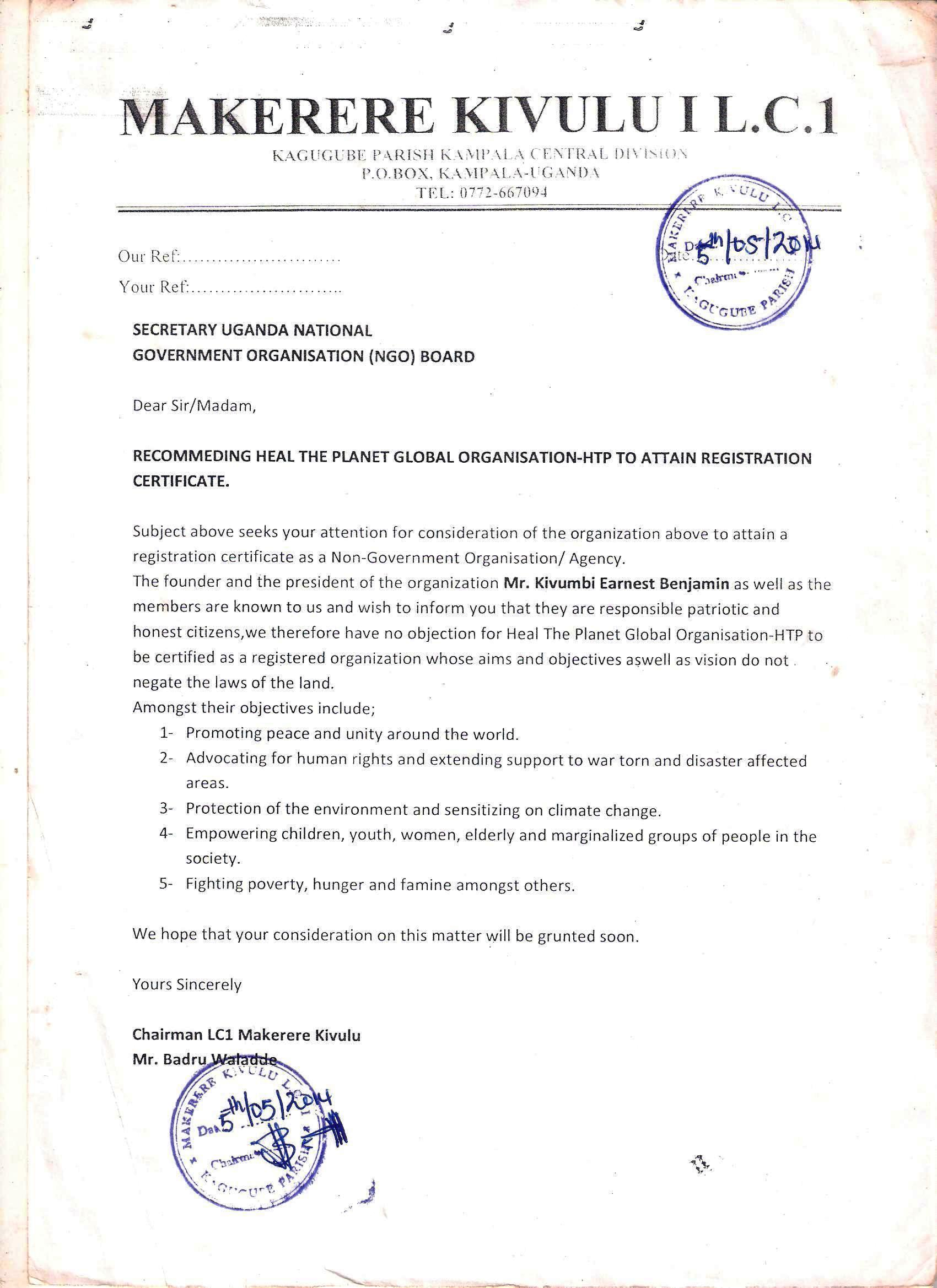 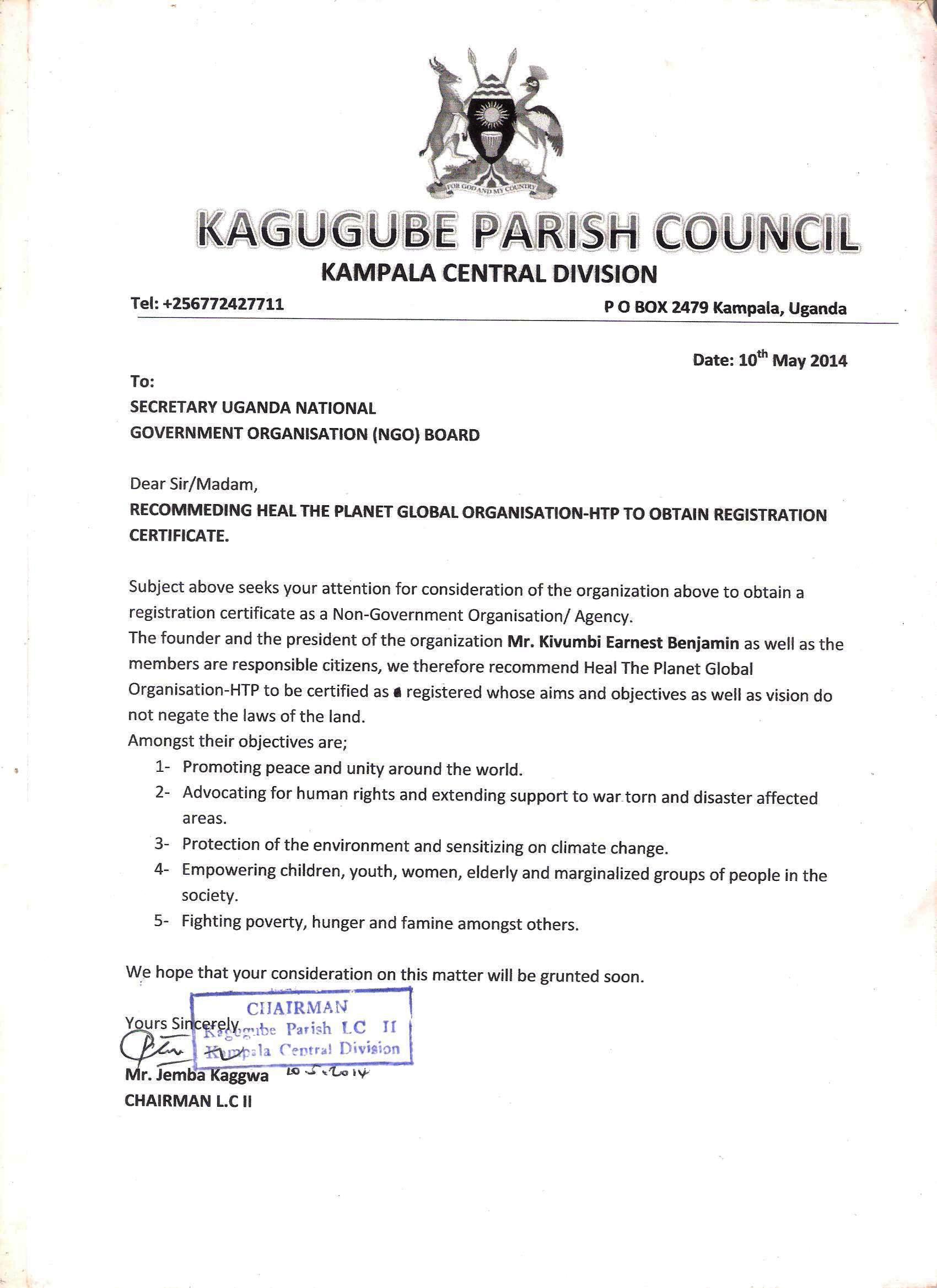 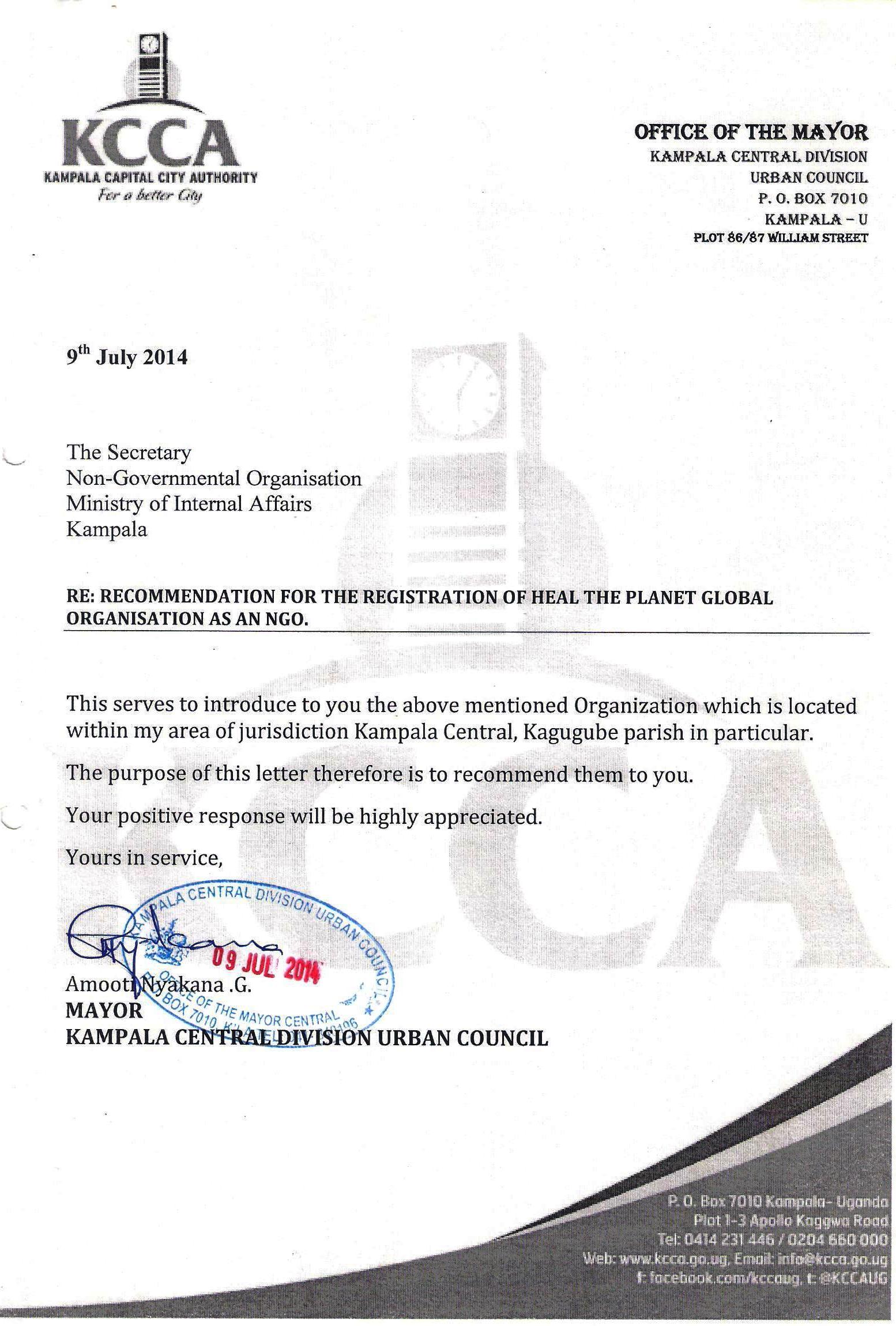 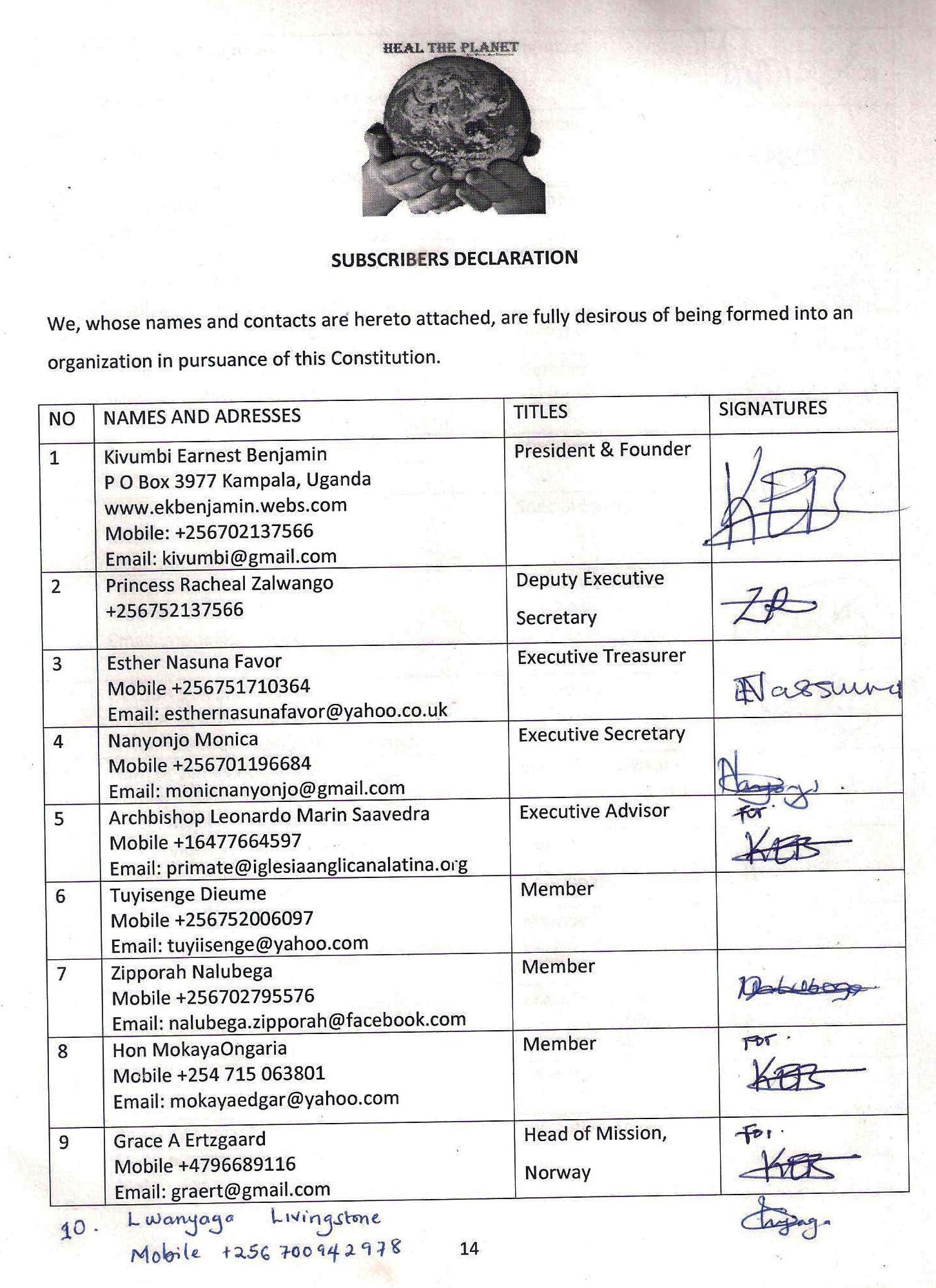 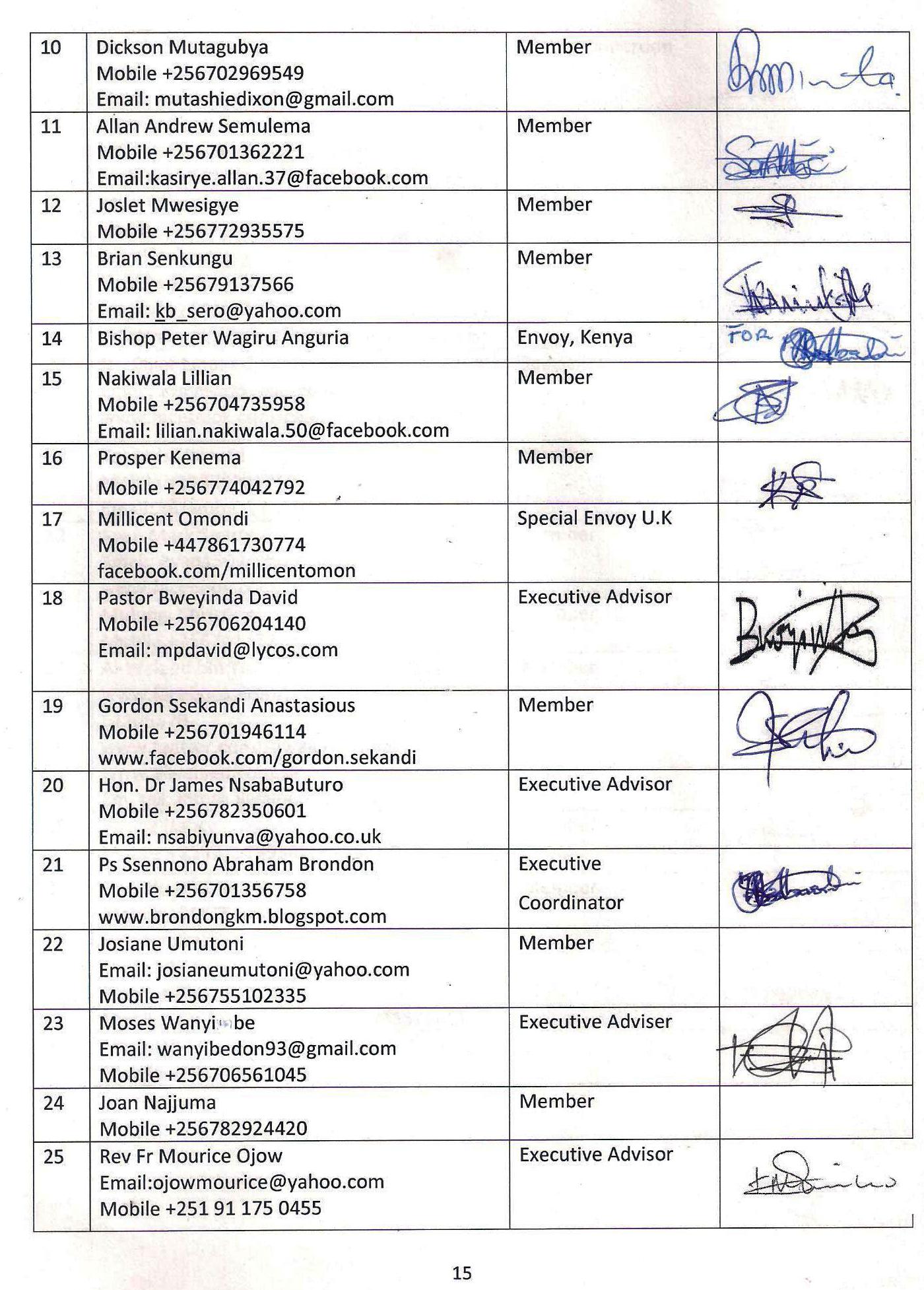 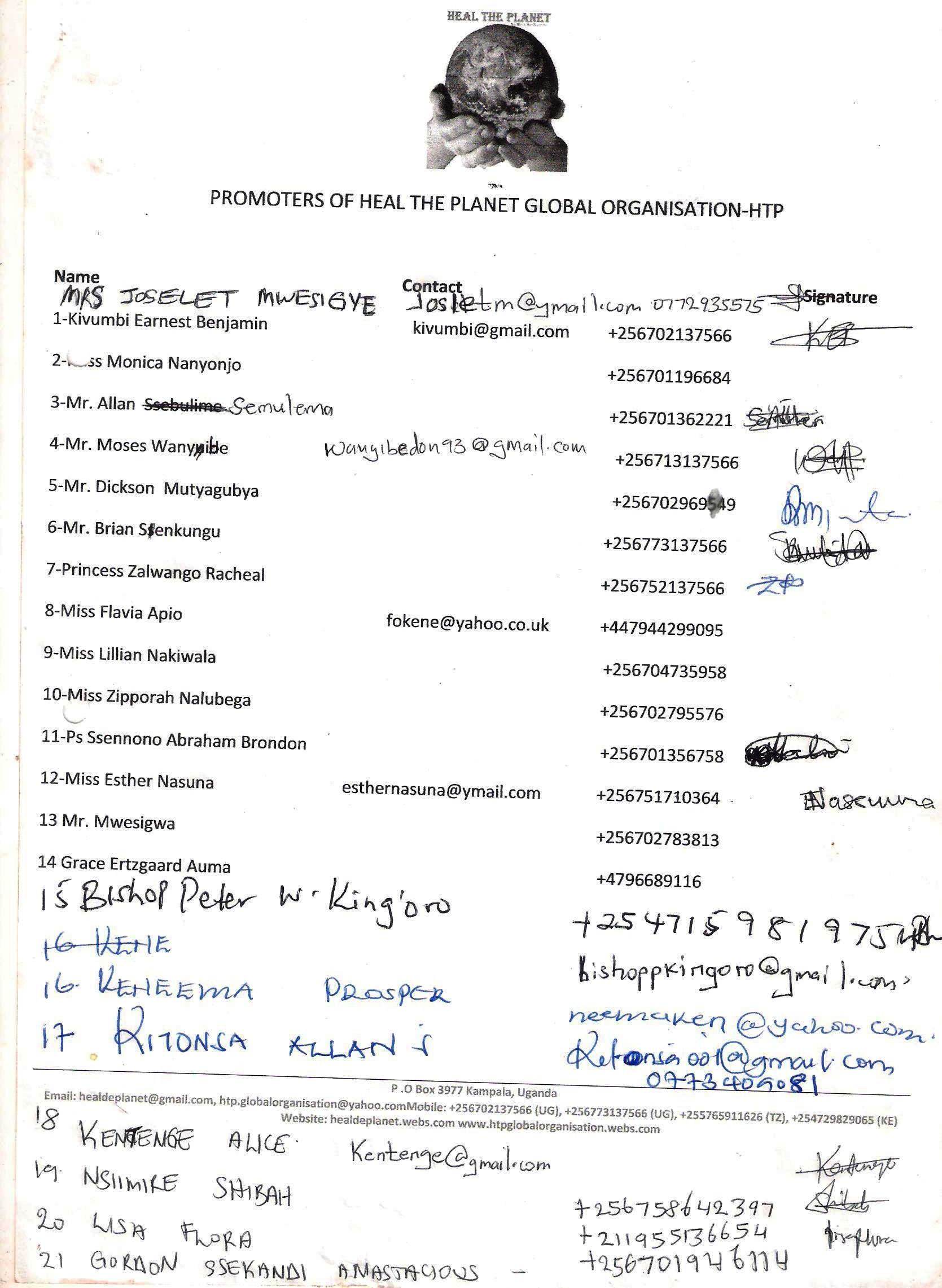 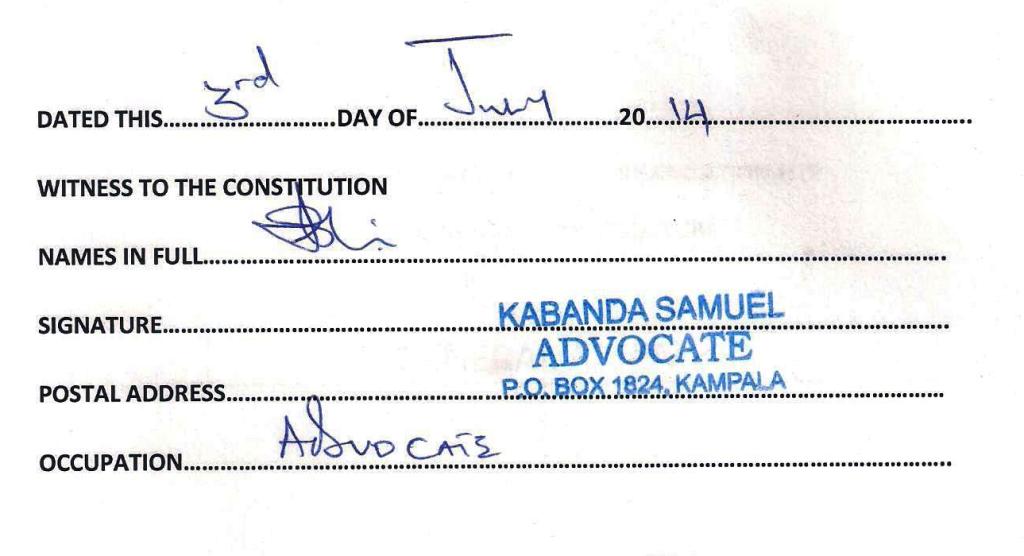 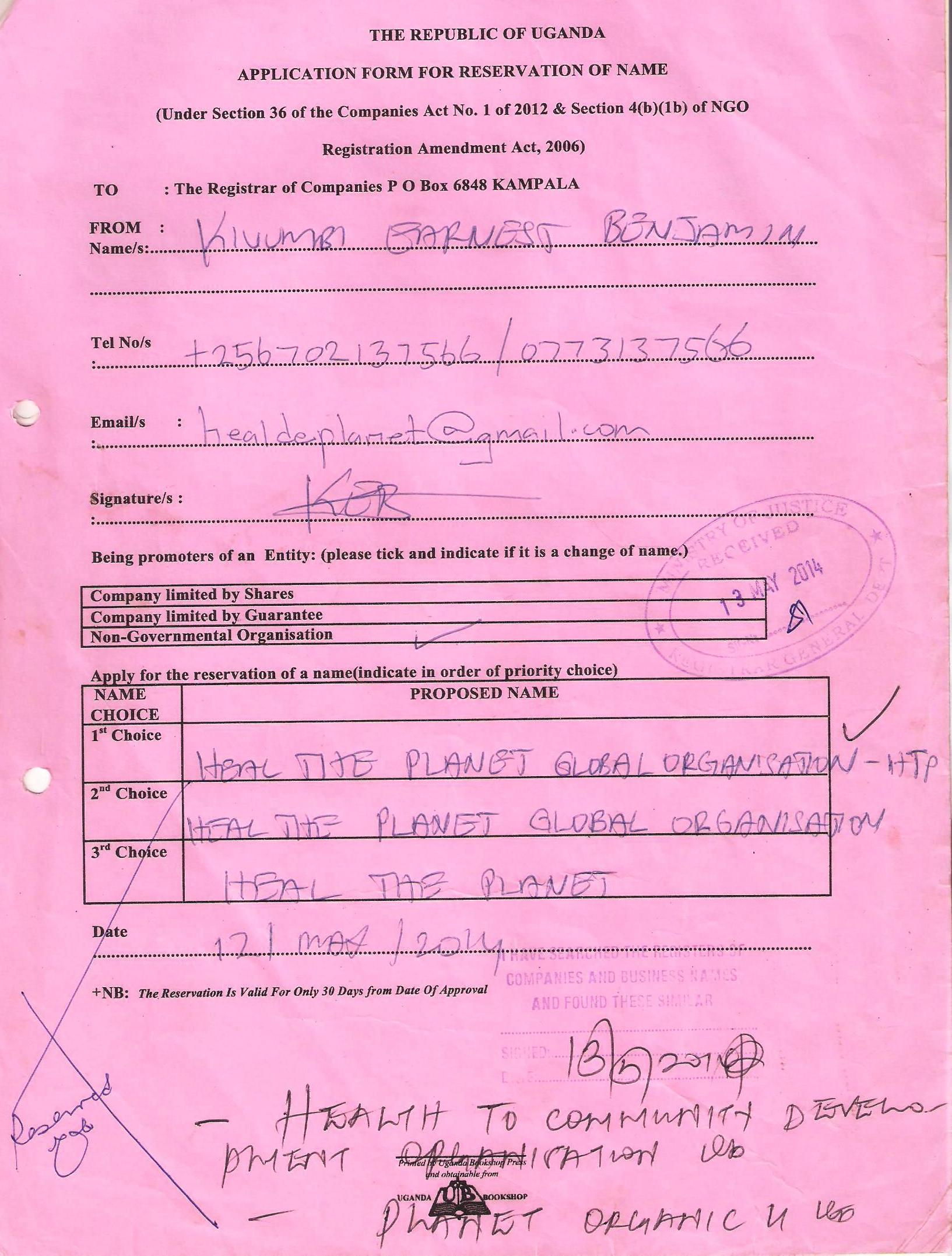 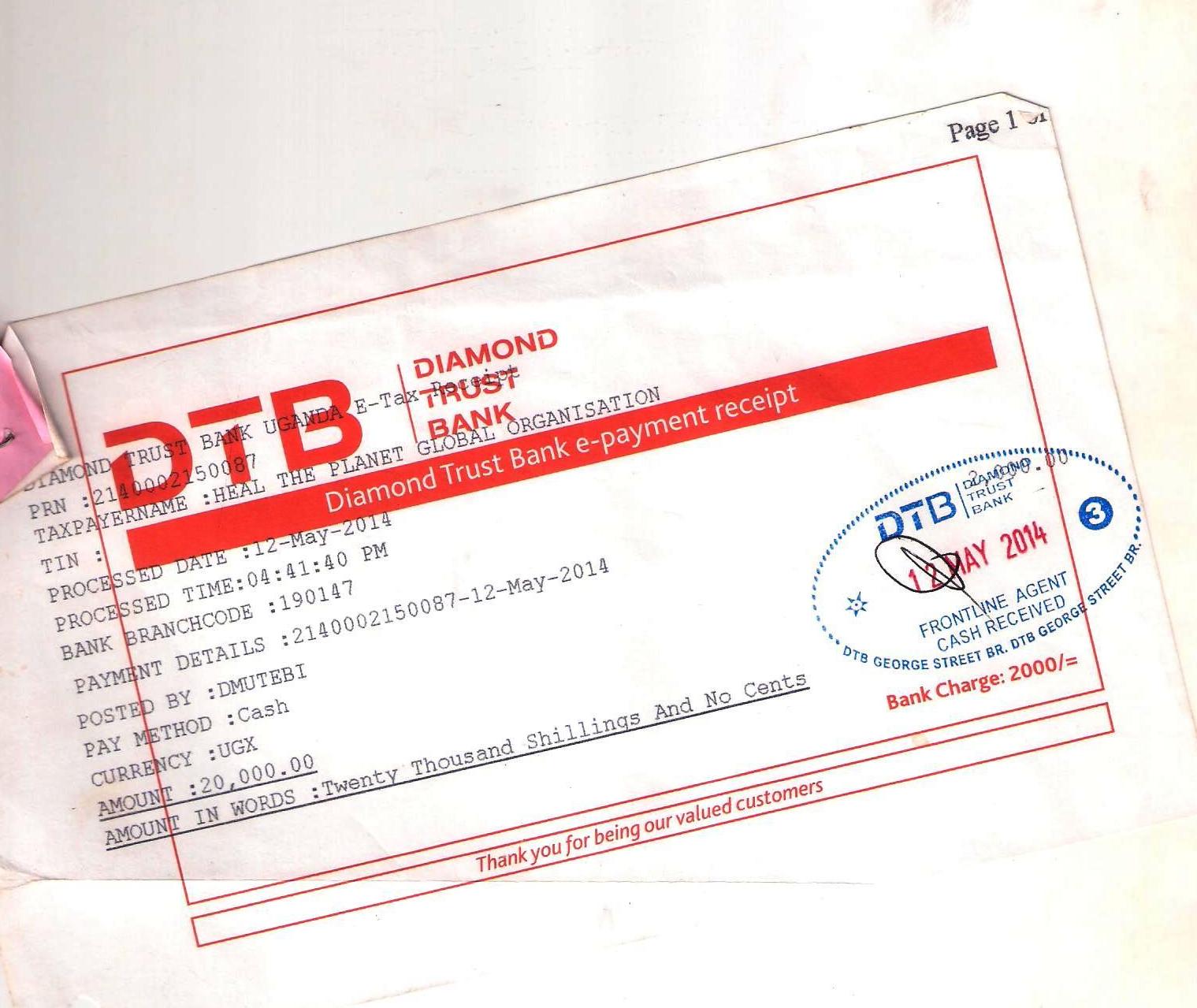 On 26th May 2014 Heal The Planet Global Organisation-HTP held a press conference at Subway restaurant in respect of Mr. Chol Majok a Sudanese national who shared his plight on the struggle he is going through for demanding his money back as well as fighting for his safety. Mr. Chol a manager of Dot Timber Company South Sudan Ltd is demanding US 319,000 dollars and 15 trucks of Teak logs worthy US 45,000 dollars from Col Joseph Bangasi Bakosoro the Governor of Western Equatorial State, South Sudan who is also threatening his life.

THE COMMISSIONER FOR REFUGEES

Investigation to establish the authenticity of the report were instituted vide the fore mentioned CRB: 697/2014

Statement was recorded from complainant and he was interviewed thoroughly. A court order was made to obtain a call data of the said telephone Nos: 0777483199and 078717777

No suspects arrested as yet.

It was established that the person threatening the complainant is actually one Col Joseph Bangasi Bakosoro and others known to him.

That on 21/04/2014 complainant CHOL MAJOK CHOL was arrested by un known people who had masked their faces and moving in a civilian vehicle which Reg. no. he did not notice due to threats.

That he was detained in a building near Mbuya army Barracks for 4 hours not until the wife to the Hon Minister Saleh intervened for his release having received a call from one Manyang a staff of south Sudan embassy.

That these threats originated from criminal case No57/2013 which was filed against Col: Joseph Bangasi Bakosoro in the high court of south Sudan in 2013

That the complainant won the case and he was to be paid some money which could have angered the Col.Joseph Banagasi Bakosoro(suspect) to cause the threats.

It's reported that since then the complainant has not been paid.

It was observed that complainant was given a tender of supplying Teak logs for the demarcation of Maridi County borders in southern Sudan.

That he supplied the logs but he was not paid until matters reached court which eventually resulted into this threat.

That after detention and release while in Uganda on 21/04/2014, the complainant reported the mater to south Sudan embassy and a letter dated 23/04/2014 referring him to the office of Prime Minister was issued to him.

That the office of the prime minister referred him to the refugee family attestation camp in Adjumani as per the earlier letter dated 11/03/2014 which was issued to him.

That the refugee family attestation camp commander sent him to police for assistance.

That Mr. Chol a manager of Dot Timber Company South Sudan Ltd is demanding US319,000 dollars and 15 trucks of Teak Logs worthy US45,000 dollars from Col Joseph Bangasi Bakosoro the Governor of western Equatorial State, South Sudan who is also threatening his life.

Suspect to be traced for interrogation and if possible face charges in criminal court.

The said motor vehicle which suspects were moving in to be traced and impounded for investigation.

Call prints to be attached for records / evidence.

Investigations to be conducted wider in order to bring culprits to book for justice.

RE: INVITATION FOR A PRESS CONFERENCE IN RESPECT OF REPORT ON ALLEGATION OF THREATENING VIOLENCE ON CHOL MAJOK VIDE A SUDANESE NATIONAL (CPS CRB: 697/2014)

You’re kindly invited for a press conference which will take place on 26th of May Monday 2014 at Subway restaurant 9:30 am next to Parliament. Mr. Chol Majok a Sudanese national will be sharing with you his plight on the struggle he is going through for demanding his money back as well as fighting for his safety. Mr. Chol a manager of Dot Timber Company South Sudan Ltd is demanding US 319,000 dollars and 15 trucks of Teak logs worthy US 45,000 dollars from Col Joseph Bangasi Bakosoro the Governor of Western Equatorial State, South Sudan who is also threatening his life.

I therefore request for your cooperation in media awareness thus seeing justice for Mr. Chol.

I look forward to seeing you.